The Man-Machine: Kraftwerk’s impact on music 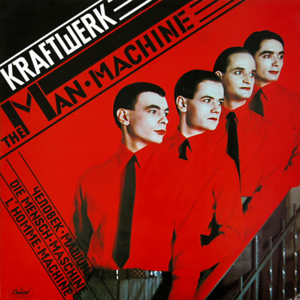 Most famously clad in bright red button-ups and even brighter white face makeup, experimental German electronic group Kraftwerk are arguably one of the most influential and important music acts in history. Influencing genres from ‘80s new wave to industrial rock to hip-hop, it’s hard to find a genre without a trace of elusive Kraftwerk influence.

Kraftwerk’s lineup has shifted over the years, but the most famous one consists of Karl Bartos, Ralf Hütter, Florian Schneider, and Wolfgang Flür. Ralf Hütter and the late Florian Schneider (1947-2020) are often considered to be the two “main members,” or “leaders” of Kraftwerk.

When listening to Kraftwerk’s futuristic and complicated synth, for many, it is a bit difficult to believe that music of this type was released in the late 1970s and early 1980s, as much of their work sounds as if it comes from a distant, technological future. This sense of futurism is ever-present in their discography, manifesting in songs about robots, industrialism, and computers. However, this futurism is not always portrayed positively in their music; many of their songs are critical of corporatism and the dystopian future many feared in the late 20th century. Kraftwerk and their music represent the paradoxical dissonance between a cold and distant humanity and the extravagant promises of technology.

Merging experimental synth with danceable club music, Kraftwerk’s sound is wonderfully eccentric and avant-garde. It plays with common musical conventions without becoming too technical or polarizing; it is catchy and rhythmic without losing its interesting experimentation. Each Kraftwerk album is wildly different from the last without losing their signature sound. While they started out with experimental progressive rock popular in the West German music scene (often dubbed “kosmische Musik,” lit. “cosmic music,”) their most famous and influential works come from their switch to electronica and electropop beginning with the 1974 record Autobahn, released after their final progressive rock album, Ralf und Florian (lit. “Ralf and Florian.)

Radio-activity in 1975 was a humorous play on words, as the album is about both radio broadcasts and radioactivity. The album itself is melancholic and slow, with several tracks on the album being more atmospheric pieces of noise than they are songs. Their symbolic fascination with transportation hinted at in Autobahn would return with 1977’s Trans-Europe Express, which was a celebration of Europe’s railway system and the connections brought with it.

The Man-Machine (1978) and Computer World (1981) are arguably their most popular and pop-oriented albums, which are reflections on robotics, corporatism, industrialism, and the growing dominance of computers in the late 1970s and early 1980s. Computer World in particular is a bit of a time capsule at times. The second track, “Pocket Calculator,” reflects a time in which things like pocket calculators were new, innovative, and readily accessible. While the main hook of the song, “I’m the operator with my pocket calculator,” may seem trite or even satirical to many in the present day, it represents the growing fascination and excitement in regards to technology for many in that time.

While their experimentalism may not appeal to everyone, it is clear that their influence is something to be respected. Kraftwerk is an act that is essential listening for all music fans– whether they are amateur music critics, mainstream pop music fans, electronic music aficionados, ultra-obscure noise music experts, fans of hip-hop, or pretentious rock elitists. “The Model,” the 1978 hit off of The Man-Machine, is a good place to start. While still keeping the slightly eccentric Kraftwerk sound, it is a relatively accessible and danceable synthpop song. Even if one does not particularly enjoy their music, all music lovers should appreciate their impact and ethos.