Three Cheers for Sweet Revenge, the story behind the iconic 2004 album 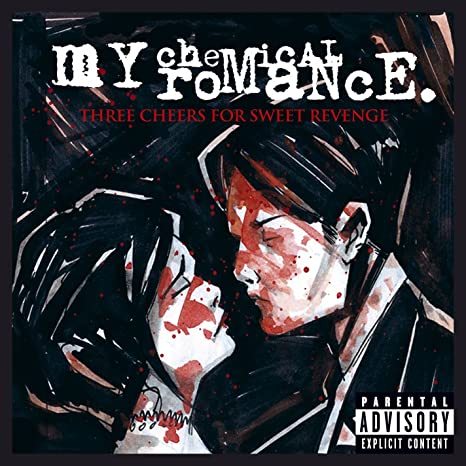 What would you do to see your partner again? Is death enough to separate two lovers? How many lives would you take to be with your soulmate again? This is the basis to the story that “Three Cheers for Sweet Revenge” tells. In this album you’re taken along the way to see the lengths one must take to see their sweetheart again after death. However, one must remember that when dealing with the devil there is always a catch.

“Three Cheers for Sweet Revenge” is a concept album written in 2004 by the band My Chemical Romance. According to legend, the band’s lead singer Gerard Way was compelled to form the band after witnessing  9-11. The attack made him rethink his job in animation and pursue a passion that would ultimately influence the lives of many. All of the band’s albums have a story to tell, and Three Cheers isn’t excluded.

The story of Three Cheers is a continuation of the story told in the band’s first album “I Brought You My Bullets, You Brought Me Your Love.” In this album the two lovers run away from an unknown enemy before ultimately being gunned down in the desert. Subsequently, in Three Cheers, one of the lovers is sent down to hell without the other. There the devil gives the opportunity to see her again and all it costs is the lives of 1,000 evil men. Therefore he is given a gun and begins his journey. During his journey our protagonists questions if his lover still loves him in death or if she even loved him at all, at the same time he struggles to complete his task and falls into a deep depression because of it. Eventually he nears the end of his journey and has one more man to kill which ends up turning out to be himself. So as he reunites with his long lost love, they are sent to hell where they are separated forever.

Three Cheers for Sweet Revenge’s sound can be described as a mixture of many genres like pop-punk, alt rock, post-hardcore, and punk rock. Lyrically, the songs deal with themes of death, love, depression and even drug abuse. Additionally, most songs in the album have around the same amount of the energy behind the vocals and instrumental, the exception being “Interlude” which is significantly slower than the other songs but also being the shortest at only 57 seconds. Nonetheless, the album as a whole is an amazing listening experience that should be enjoyed by anyone.

While the songs  themselves are enough to make people fall in love with the album, the story elevates the album from great to amazing. As an album, “Three Cheers for Sweet Revenge,’ does a great job creating a unique listening experience in which truly paying attention to the lyrics reveals Romeo and Juliet style tragedy. While maybe not appreciated by critics, the album is certainly well loved by its fans and others. Regardless, My Chemical Romance’s sophomore album solidifies itself as a pop culture icon and is to be loved by old and new fans alike.