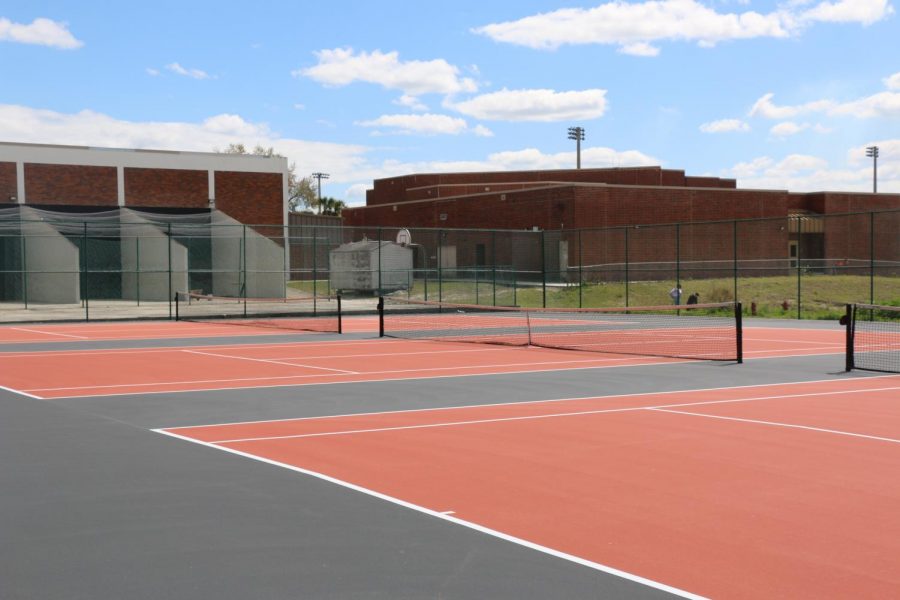 Over the past couple of months, Oviedo High School (OHS) has undergone some much needed upgrades and restorations. From the renovations in the band room to the resurfacing of the tennis courts, the campus is taking on a fresh, updated look.

Students and teachers believe these improvements will contribute to the attractive appearance of the school grounds.

“We are a really clean school; everyone always remarks about how beautiful our campus is,” said William Furiosi, the coach of the tennis teams.

Furiosi was interested in refurbishing the courts from the moment he stepped on as coach and is pleased with the work being done.

The courts had many cracks which could both cause players to stumble and affect the trajectory of the ball.

“The first day I got out there as the tennis coach, I knew they needed to be improved, because they were not playable when I started coaching four years ago, and they weren’t actually playable until a couple weeks ago.” Furiosi said.

The state of the courts did not receive a lot of attention from students, and many may not have known how much an upgrade was needed. The team still hasn’t been able to practice or compete on their new court as finishing touches are completed. This means no home matches until next season.

OHS’s bands have played an important part in the community through their performances at football games and in concerts. The band room has recently been revamped to give the space a more updated feel and a better sense of school spirit.

“It brings a positive culture,” said band director Zachary Chowning. “How they reacted and how they’re rehearsing is so much better than last year.”

The band room has needed upgrades for quite some time now, to be specific, twenty years, according to Chowning. One of the biggest additions is the painting of a lion in the school colors of orange and black.

Chowning believes the renovations will further motivate students and unite them in working toward a common goal.

“It’s good for them to see something new happening, as they feel more obligated to take care of it,” Chowning
said. “It’s important to take care of the things that you are using and what you’re given, because a lot of school’s aren’t as fortunate.”

The school made some minor refurbishments to building four in December. Doors were added to the athletic training room and to seperate the football and PE areas.

The computer labs used by the campus publications and journalism classes will also appear diff erent in the
near future, as new desktop computers will be installed for the upcoming school year.

Those impacted by these changes believe they will contribute to the feelings of school pride and confi dence that principal Trent Daniel has emphasized.

“One of the things I think Oviedo is great at is you can see the pride in our school.” Furiosi said.