Head to Head: Should inmates be released during pandemic? 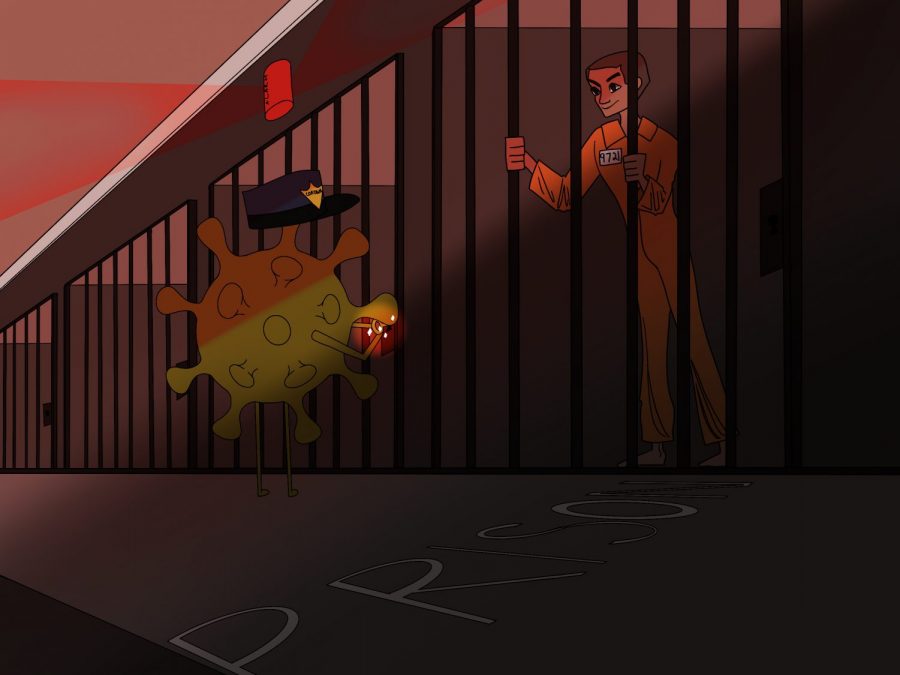 States should practice empathy and release prisoners
By Skylar Zern
The United States is no stranger to incarceration. In fact, per capita, the U.S. has more people behind bars than any other country in the world, with over 2.3 million incarcerated people nationally. Needless to say, our deep-seated desire to lock criminals up for incredibly long periods of time has ultimately led to overcrowding and increased prison density. Most people ignore this fact but with coronavirus inevitably finding its way into prisons across the nation, this factor can no longer be ignored.

In overpopulated prisons, social distancing is impossible. Between small, cramped cells that are usually shared and large crowds in the more open spaces outside of confinement, staying six feet away from one’s fellow inmates proves to be challenging.

According to The Marshall Project, North Carolina’s Neuse Correctional Institution was able to test all 700 of its inmates and found that 65 percent of prisoners had the virus, with 98 percent of them lacking symptoms. Not only does that prove how rapidly the virus spreads in high-density locations like our nation’s prisons, but it also demonstrates how beneficial testing can be to the identification of inmates carrying the virus to other inmates or corrections officers. Additionally, for those that do test positive, there are few options for quarantine measures other than solitary confinement. A push-button issue in-and-of-itself, solitary confinement hardly seems like a valid solution due to its harmful psychological affects, notion as a disciplinary measure, and overall limited number of cells to accommodate all inmates that test positive. With no room to social distance, a high population density, and already unhealthy conditions, prisons across the US have become glorified petri dishes for the rapid spread and manifestation of Covid-19.

Due to the seemingly never-ending spread of the coronavirus, governors across the US have made moves to release thousands of elderly, at-risk and nonviolent offenders, in addition to detained individuals awaiting pretrial hearings. Although some may complain about this movement to decrease prison density, it is the solution and ultimate key to truly limiting the spread of this pandemic. Although those behind bars are believed to be there for a reason, empathy is just as important as justice.

Many critics of the move to release inmates are concerned about a rise in crime and the actions of “dangerous felons” once they’re no longer in confinement. This is arguably a legitimate concern, but since only nonviolent offenders with minor drug-related charges, possession, or prostitution are being released, the general public doesn’t need to worry about the threat of mass murderers or violent characters returning to society. Overall, inmates are still human, they’re still susceptible to the virus, and they’re at an even higher risk than most. No one deserves to die from coronavirus, and it’s unfair for those behind bars to be forgotten entirely. Slowing the spread of the pandemic means proper health measures and care at every level, and that includes our nations many prisons. Releasing inmates shows promise and will ultimately be for the better.
Releasing prisoners will lead to more crime if not monitored
By Vincent Crook

With the Covid-19 pandemic continuing to edge it’s way into the summer months, there has been controversy regarding prisons and how they run things. According to Fox News, a couple of prisoners in North Carolina have died of Covid-19, causing outrage for many who have family members in the prison.

Because of this, a prisoners began to be released due to outrage and protests from outside. A lot of families said they didn’t want their relatives to die without seeing their families. While this sounds like a good idea, there is also the case where some people haven’t learned their ways while in prison, and releasing them without keeping watch over them could be a bad idea.

One of the prisons that is severely affected by this is the Cook County Jail in Chicago, Illinois. They have 800 prisoners sick, with 7 dead. They have ordered social distancing orders, but not a lot of prisoners have been released. I think this is a good plan, considering a lot of the criminals there could be dangerous, and might cause some problems in the local area if there was a mass release.

I think releasing prisoners can be good in certain situations, but not without some way to monitor them. Who is keeping track of these inmates once they are released? How do we know they won’t go back to the crimes they were put into prison in the first place? Releasing prisoners sounds great, but to let them free without any sort of substantial monitoring put in place.

Prisons need to make sure if prisoners are sent home that they are put under house arrest or have officers watching their movements. But, because of the pandemic, mobility is an issue for many people right now who don’t want to contract the virus. Can they really check the hundreds of people they are letting go thoroughly enough? What happens when all of this is over? Will they be able to gather everyone back to serve out their remaining sentences?

I admire the efforts to keep safety standards high and prevent the spread of Covid-19, but if these monitoring systems aren’t thoroughly vetted and checked, we might see bad things happening in quarantine and nobody wants that.