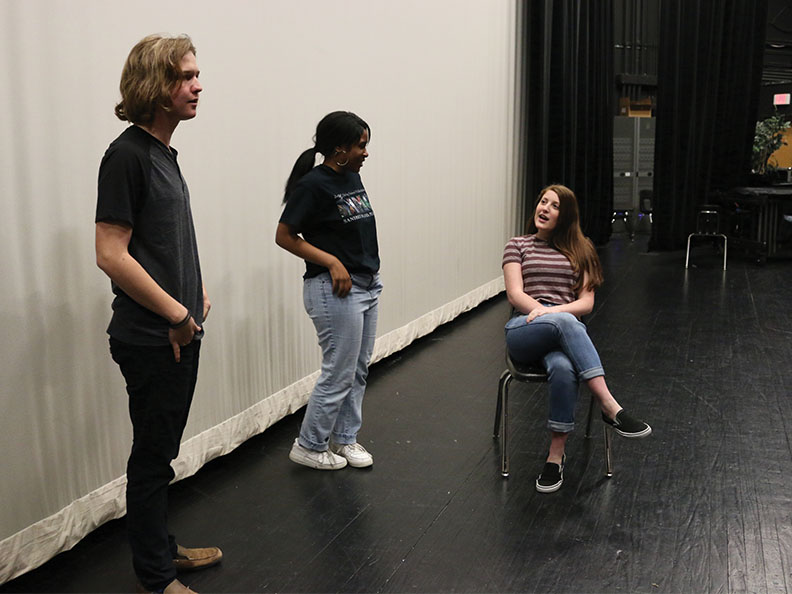 This story was originally published in the fifth edition of The Lion’s Tale (March 14, 2019).

The opening night of a theatre production is full of bright lights, applause, rituals and lots of enthusiasm.

“There is so much excitement backstage that you can almost feel it tangibly,” said Tim Carter, the theater director and drama teacher.

The department will debut The Great Gatsby on March 28. However, what the audience will see is only a fraction of what goes into the production process.

The entire procedure begins with selecting a show. Drama teacher Tim Carter said it requires combing through different company catalogs, searching for shows students will enjoy and be able to perform.

“I also make sure that I have the number of students in my department that can fill the roles,” Carter said.

But the selection of a show was a little different this year, as Carter allowed his students to select a production.

“This show was the students’ show,” Carter said. “They have been telling me for two years how much they love Gatsby.”

The selection of The Great Gatsby was especially exciting for junior Elise Compton, who played Daisy Buchanan.

“I tried out for Gatsby because I really enjoy literature,” Compton said. “Because it’s based on the book, I was super excited.”

Carter said that the show must meet the level of technology that OHS can provide.

“The next step is to make sure that we have the technical capability to do the show,” Carter said.

Carter said that Gatsby is a show with quick scene changes and lots of scenery movement; this is a difficult task to achieve since OHS lacks a flying loft, a theatrical rigging system of ropes and pulleys that can quickly and quietly move set pieces. Instead, Carter developed an alternate method.

“What I decided with this show was to use projections and small set pieces,” Carter said.

Next, auditions begin. This is when, according to Compton, the students see the script for the first time.

“I set aside a day to have students come to the drama classroom and audition for the show,” Carter said. “Auditions usually take a couple hours.”

Shortly after the auditions, Carter posts a casting list. One of the most difficult things for students to face is the rejection if they aren’t cast in a show.

“It’s just as hard for me to break the news to students who don’t get the role,” Carter said.

But for those who get roles, the feeling is rewarding.

“Seeing my name on the list made me feel pretty darn good,” said sophomore Tyler Wampole, who plays Nick Carraway.

Rehearsals are usually scheduled for two or three times a week, plus Saturdays from 8:00 a.m. to 2:00 p.m. during the month of the show.

According to Carter, early rehearsals are challenging for his students.

“Students are very busy and they have to get into the routine,” Carter said.

Compton, however, feels the rehearsals are easy, thanks to the relationships she has with her fellow cast members.

“We’re such a big family that rehearsals are really enjoyable,” stated Compton. “Once you learn about all of the cast members’ and techs’ lives and share a connection through theater, it’s amazing.”

Students begin to memorize lines, plus work on blocking and timing. These three aspects go hand-in-hand and can be difficult, as theater student Michele Hebert puts it.

“Blocking is: they’re saying this line in this exact spot,” Hebert said. “I feel like that’s kind of hard.”

While blocking can be challenging, line memorization presents itself to be the most difficult part of rehearsals for both Compton and Wampole.

“You’re basically remembering a book that somebody else wrote,” Wampole said.

Students also must get to know the character they’re playing during rehearsals.

“I think I enjoy it so much because I get to experience different lives,” Compton said.

Experiencing the “different lives” of characters isn’t without its challenges.

“Acting on a character you don’t know is tough,” Hebert said.

While those on-stage face challenges of learning lines, timing, and placing, those off-stage face Tech Week, which is the week leading up to the premiere of the show.

The members of the technical team make sure all the technical portions of the show are running as they should. Any final touches are made during this week.

While technical issues are rare, they can be worrisome.

“Problems during Tech Week could be that something doesn’t work, especially if it is right before the show day,” Hebert said. “Or a prop from set is broken and it’s too late for a replacement. We usually don’t have problems because our techs are on top of everything.”

Tech Week allows the director to ensure everyone knows their lines and where to be without having to be told.

“There is one day that is dress rehearsal where cast members wear costumes, makeup and mics through the whole show with no interruptions,” Hebert said.

Once the show is running smoothly and everything is in order, the cast and directors await the opening night.

On the night of the show, the cast arrives an hour and a half before it starts to get prepared with costumes and makeup. They don’t just prepare the conventional way, however.

“There are a lot of traditions and rituals that go on for new members, but they have never revealed to me what they are,” Carter said.

Some of the traditions aren’t as discreet.

“There is a chant that they do on the loading dock that isn’t a secret,” Carter said. “They get very loud.”

Of all the steps, the opening night is the easiest for both the director and cast, since the show is prepared to run smoothly.

“It’s an amazing feeling and students get ‘hooked’ after their first show,” Carter said.

Because of this, moving on after the show isn’t always easy, according to Compton.

“We become such a big family during every single production and it’s hard not to get attached,” Compton said. “But I always try and look forward because I know we will be starting another great show.”

According to Wampole, being a part of a performance is rewarding.

“You committed to something, and you saw it through the whole way,” Wampole said.

“This is so much fun for them that they welcome challenges because it makes them better actors,” Carter said.